It’s easy to accept all that has happened. It’s easy to accept all the heartaches that keep coming my direction regardless of who it is sending the metaphorical pain. You see, I’m not a good person. I’m not a victim, nor am I peddling that idea. I’ve set myself up for the world to see and placed a bullseye around myself that would be hard to miss. This isn’t new behavior. I’ve done this before, but in several different versions. Depending on my confessions and lightly-laced admissions, I can determine the size of the target. So, I’ll keep some, just a few, things to myself.

On my last post I shared I started my journey hitting the streets of Houston at a very young age. And yes, I was 13. I was in middle school when I started to hang out with a set of girls much older than me. I was involved partially with school activities such as sports and an art program. It was fun and I loved being around my friends. Around the last months of my middle school career things took a small pivot. A girl I was hanging out with had different ideas in mind and well I just kind of followed. After school instead of heading back home to practice for whatever sport was that season, I would start to hang out with her. She would be the one to tell me what it was to go beyond just kissing boys. She had a list of friends she would meet up with at malls, movie theaters and so on. She had a part time job. She worked on weekends.

Again, she was much older.

Not so long after hanging out with her I met my first ever boyfriend, a real boyfriend. I’ll leave you to interpret that. Not like the one that asked me to be his girlfriend and then later that day ignored me and passed me a note reading something along the lines of not being his girlfriend anymore. That happened in 6th grade when I was 11 and I was now much more mature in the 8th grade. Yes, I actually believed that. I didn’t see her much longer after 8th grade. I leave you with 2 different stories to better grasp the idea of who I was starting to become.

My first and only time ever being put into the back seat of a cop car was at 13. It was the summer and my friends and I wanted to ride around late at night. A police officer noticed the car jam-packed with kids and pulled us over. I was told by friends to say I was 17, but I couldn’t. I told the truth and it resulted in my being hauled off to juvenile detention. My mom picked me up the next day in the afternoon. She told me if she ever got another call like that one, she would leave me there. I believed her. I knew she didn’t have the time to pick me up from anywhere. She had work to be mindful of and I was distracting. So, I made sure to never get into any legal trouble again. Well at least not at night. I still got a few curfew tickets years later, but of course those were during the day when we would skip school to walk down the street to the store or to a restaurant where we could gather our money together to afford food.

I know what you’re thinking, semi-arrested for curfew, yes.

It’s embarrassing to this day.

This other story is a little more intense. Next door to my friend with a job lived a young girl, around my age with much older brothers. She was hardly ever allowed to leave the inside of her home. My friend had made nice with her brothers so sometimes she would come out to talk and take walks with us to the store. I didn’t know why she had such strict rules to follow. One day she told my friend she needed to leave. That it was absolutely necessary that she run away. So, like a newbie to friendships I agreed to help. There we were, all three of us coming up with a plan to help her escape whatever she needed to escape.

It was late at night on a Friday when we set it all into motion.

She swung her bags over the fence and then quickly jumped over herself. The plan was to take her to my house since it was the safest place considering my stepdad never came out of his bedroom. But of course, we couldn’t be home when my mom arrived because we would run the risk of getting caught. Around the early morning hours, way before sunrise, we made our way to one of the main roads in our neighborhood to catch the bus. The only problem was the buses weren’t in operation that early in the morning. So, we walked to the end our neighborhood and sat on the sidewalk in front of the middle school I attended and waited. All before sunrise.

Scared they would take us. Scared my mom or her family would find us walking the neighborhood streets in the middle of the night. I thought she would yield and just give in. But no, she was determined to leave. The bus finally arrived soon after sunrise. We boarded and headed towards my sister’s home. We walked again because I couldn’t remember which bus to take next. I now wished I had asked why she needed to so desperately leave her home. I never talked to her after that since we weren’t really good or great friends.

Before all of this happened I already had extensive experience walking the streets late at night, but never before so far away from home. Soon after I realized I had much more to explore. A lot happened soon after. I am just now realizing I’m leaving so much out. So, I’m considering telling some of those stories in voice form. But not just yet. I still have much more that I want to write. 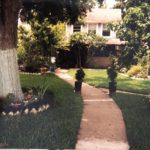 the need to impress